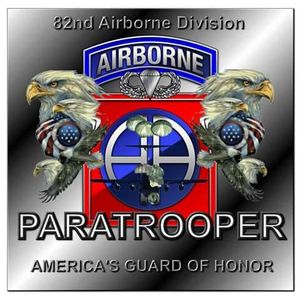 Fill out the membership form and join.
Stand Up and Hook Up!

The history of John Steele, who was an actual paratrooper, and after whom this chapter is named, is as follows: 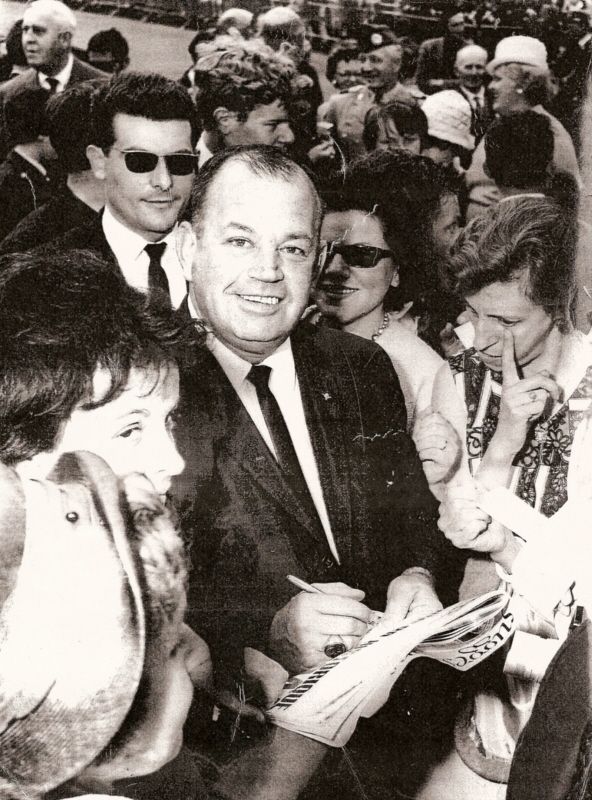 Photo of John Marvin Steele taken at the Paris airport in 1964 signing autographs.

On the night of the D-Day (June 5–6, 1944), American soldiers of the 82nd Airborne parachuted into the area west of Ste-Mère-Église in successive waves. The town had been the target of an aerial attack and a stray incendiary bomb had set fire to a house east of the town square. The church bell was rung to alert the town of the emergency and townspeople turned out in large numbers to form a bucket brigade supervised by members of the German garrison. By 0100hrs, the town square was well-lit and filled with German soldiers and villagers when two sticks (planeloads of paratroopers) from the 1st and 2nd battalions were dropped in error directly over the village.
The paratroopers were easy targets and Steele was one of only a few non-casualties. His parachute was caught in the steeple of the village church in Ste-Mère-Église, leaving him hanging from its roof-top to witness the carnage. The wounded paratrooper hung there limply for two hours, pretending to be dead, before the Germans took him prisoner. Steele later escaped from the Germans and rejoined his division when US troops of the 3rd Battalion, 505 Parachute Infantry Regiment attacked the village capturing thirty Germans and killing another eleven. For these actions and his wounds, Steele was awarded the Bronze Star for Valor and the Purple Heart for being wounded in combat.
Private John M. Steele (1912–1969) was the American paratrooper made famous in the movie, The Longest Day who landed in Sainte-Mère-Église, the first village in Normandy liberated by the Americans on D-Day, June 6, 1944. The members of the 505 RCT are considered Airborne nobility.

John Steele was born on November 29, 1912 in Metropolis, Illinois.

The founder and organizer of the John Steele Chapter, Robert H Dumke, was from the Marseilles, Ottawa area in Illinois. He was a WWII 82ND Airborne veteran. Dumke was attached to the 2ND BTN 505 RCT HQ Company while on active duty. Dumke made three combat jumps in Italy, Normandy, Holland, and also participated in the Battle of The Bulge in Belgium.

Among the other charter members who were instrumental in forming the John Steele Chapter, was Bob’s brother Leonard. Leonard Dumke also served in WWII with the 82nd Airborne Division, 2ND BTN 507 RCT HQ Co. Larry Huhn, who was recruited by Bob’s wife Marylea, spent time with the 505th during the time of the Korean War. Bob, Leonard, Larry and Marylea would sit around for hours in the afternoon on the second Sunday of each month. This was a time they blocked out each month to get together to have a few beers and enjoy each other’s company.

Bob Dumke and John Steele (whom this chapter is named after) became friends while serving with the 505 during WWII. Bob chose to name the Airborne Chapter after John Steele because of his notoriety and what he represented. He represented the rank and file soldier, a private in the 82nd Airborne division. He felt this was the best way to be inclusive to even the lowest ranking airborne soldier. Steele’s notoriety comes with an extraordinary story that was made for Hollywood. This heroic story is just one of many that could have been written, which helps perpetuate the ideals, beliefs and courage of the 82nd Airborne Paratrooper.

As the years passed on, the circle got bigger; this allowed them to apply for a charter, whereby becoming the John Steele Chapter. A special mention should be made to the likes of David Olle, Larry Hune, Robert Swanbum, Ron Moos, J.D. Lansford, Frank and Larry Dumke. Frank and Larry Dumke were Bob’s son and nephew respectively. These are the voices of your Chapter that have proudly marched miles in community parades, and stood at attention while paying their last respects to their departed brothers. It is their ideals and beliefs that shall be upheld to preserve the spirit of this all airborne chapter.

The John Steele Chapter was formed and chartered on 10 Aug. 1985. There were 27 charter members. The story is told that a few of the former boot and baggy pant paratroopers would gather at the local legion to swap stories and have a few drinks. Laughter and trickeries would fill the rooms but it was their heroic and unique past which was their common bond. The John Steele Chapter, like other chapters in the Association, was formed by one common theme, by glider pilots and men who jumped out of perfectly good airplanes. By men who have always been ready and willing to jump into danger and then drive on until the mission was accomplished.

Our chapter has members from Rockford to Bloomington and from the Quad Cities to the Joliet area. Currently, our membership body includes 114 members that participated in the WWII European theatre to the present day active duty soldier, all with one common bond, an American Paratrooper.

We gather once a month on the second Sunday (except Mother’s day,) to discuss up and coming missions such as our fundraising efforts, parade participation, other times just to talk and have a few drinks. Our current efforts are to see that as many wounded warrior from the 82nd Airborne Division make it to the annual airborne convention. Our chapter continually seeks different fund raising avenues to help defray the $800.00 cost to make it happen. Our chapter wants them to know that they are not forgotten and are part of the airborne family. The John Steele Chapter has also stepped up and sent out over 50 warm sweatshirts for our severely wounded recovering American 82nd Airborne paratroopers at Walter Reed Hospital in Washington D.C. We were able to outfit these great warriors with sweatshirts that bear the logo of the John Steele Chapter.

The John Steele Chapter holds a Robert H. Dumke Memorial picnic on the second Sunday of July on the Dumke Drop Zone, 1911 Champlain St., Ottawa, IL. All Airborne and their families are welcome.

I have tried to show where the Chapter began, who we are and where we’re going. The Chapter has come along way since its conception and our purpose has and is evolving. As our numbers continue to grow and move forward, we should remember that we are a special and unique group of people, a group with a rich and proud history. It does matter, first and foremost, that we maintain the integrity of the association and the ideals and beliefs of our founders. It is up to us, regardless of numbers, to uphold and to preserve the spirit of this all airborne chapter.

Remember that there is only one way in and that is to “Stand In The Door”!


May God continue to bless this great country, the 82d Airborne, you and your families. 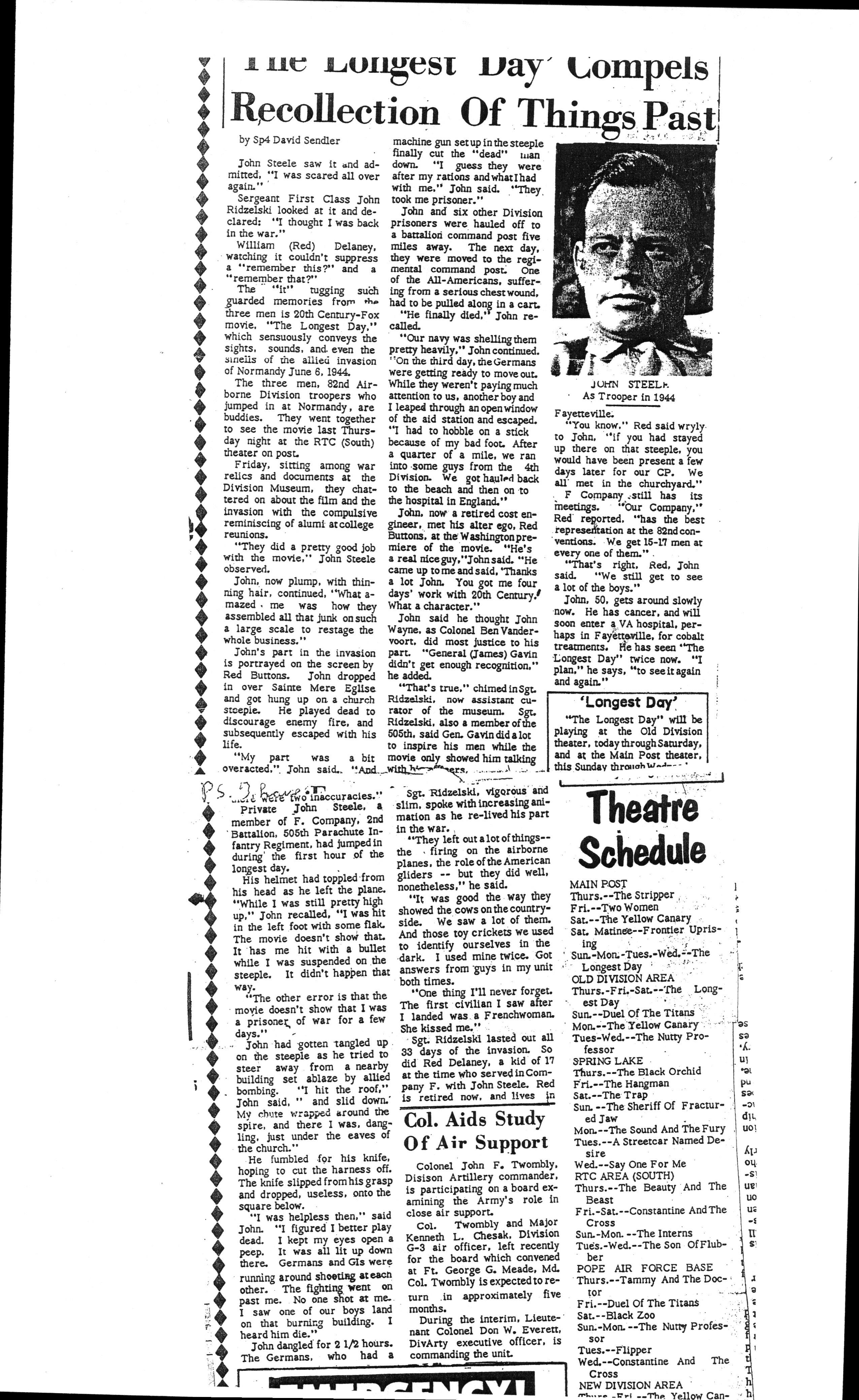 "The 82nd Airborne Division strategically deploys, conducts forcible entry parachute assault to secure key objectives for follow-on military operations in support of U.S. National Interests."
The 82nd Airborne Division at Fort Bragg, North Carolina provided the ability to begin executing a strategic airborne forcible entry into any area of the world within 18 hours of notification. Their primary mission was airfield and seaport seizure. Once on the ground, they provided the secured terrain and facilities to rapidly receive additional combat forces. The Division is the nation's strategic offensive force, maintaining the highest state of combat readiness.
The 82nd has become so well known for its airborne accomplishments that its proud World War I heritage as an infantry division is almost forgotten. The 82nd Infantry Division was formed August 25, 1917, at Camp Gordon, Georgia. Since members of the Division came from all 48 states, the unit was given the nickname "All-Americans," hence its famed "AA" shoulder patch.

In the spring of 1918, the Division deployed to France. In nearly five months of combat, the 82nd infantry fought in three major campaigns and helped to break the fighting spirit of the German Imperial Army.

The 82nd was demobilized after World War I. For more than 20 years the "All-American Division" would live only in the memories of men who served in its ranks during the 1st Great War.

With the outbreak of World War II, the 82nd was reactivated on March 25, 1942, at Camp Claiborne, Louisiana under the command of Major General Omar N. Bradley.

On August 15, 1942, the 82nd Infantry Division became the first airborne division in the U.S. Army. On that date, the All-American Division was redesignated as the 82nd Airborne Division.

The 82nd Airborne Division has had its share of famous soldiers from Sergeant Alvin C. York to General James M. Gavin. But that's not what the 82nd is really about. The real story of the 82nd is the thousands of unnamed paratroopers in jump boots, baggy pants and maroon berets, who have always been ready and willing to jump into danger and then drive on until the mission was accomplished.

The All American Soldier
www.youtube.com/watch


Blood on the Risers
www.youtube.com/watch